skip to main | skip to sidebar

Some thoughts on the Lord Soley bill

It's funny what you get inspiration from.

I was, and am, reading The Successful Self by Dorothy Rowe who, among other things, trained as a Child Psychologist.

One of the main concerns I am chewing over is what I chewed over last time:  Lord Soley's bill.

As I read the book I came across this sentence:  'We can explain other people's behaviour soley in terms of whether they are like us, and if they are not, we say they are mad or bad.'

Does that explain the hostile nature of some people in society to home educators?

When I mentioned that we educated 'otherwise' to folk I barely knew (who did not home educate) I had the impression that they drew away their metaphorical skirts.  We weren't like them.  We were mad.  Or bad.  Or both.  But we were certainly 'other' - not like them, not in their tribe, beyond the pale.

So we have a great deal of interference in home education (LAs would love to register and monitor, even more than they do now without real authority).  Add to that the nasty press coverage making much of the otherness with the deaths of children which had little or nothing to do with the mode of education.  How often do you read 'Schooled child dies of ......., in ....?  But, should there be a home-educated youngster involved and the mobs are stirred up and baying for the symbolic hanging enacted by registration and monitoring.

But, back to Dorothy Rowe. In a list, she defines a successful self as being "not engaged in a constant battle to avoid the threat of the annihilation of the self."  I've put that sentence in bold because it has a two-fold meaning.

My eldest girl had just that struggle at school.  How many ways others in the school environment tried to annihilate her.  By physical attacks, yes, by emotional abuse, yes, by ignoring her altogether, yes.  She was not allowed to be a 'successful self' until she and I sat down together and I asked 'Would you like to be home educated?'  After thinking a bit, she said: "Yes."

Out of school, they were no longer engaged in a constant battle to avoid the threat of the annihilation of the self.  That is what home education brings.  Freedom to study what you want, to discover what you like, to understand who you are, without the ceaseless and ridiculous demands of a bureaucratic system gone mad.

The bureaucratic system tries constantly to break into home educators' lives.  It says home educators must be registered (they don't need to be).  They should be monitored (why?) They have to learn what WE want them to (prove that what you want them to learn will help them to avoid the threat of the annihilation of self and we can talk).  The very intrusion of the state that encourages young people to fight to retain their self-hood is NOT welcome in my house.

My days of home educating are behind me, but I still deny that the state has any business reaching its grubby and guilty paws into home educators' lives.  Indeed, once it has breached the innocent sanctum of the ordinary home educating domicile, it will be game over for ANY parents and ANY children.  It is a wedge to open a gateway for private firms to pry, and for the state to numb the active and interested minds as much as they do at school.

State functionaries go fix the schools.  Make them havens of learning and hives of educational fascination.  Make them safe places for children and adults who seek to facilitate learning.  Then we'll talk.

Or maybe we won't. 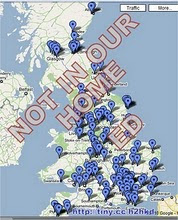 Danae
Home educating (I think you guessed that), proud mother, freelance writer waiting to be adopted by a rich publisher, family history buff, avid and opportunist reader, non-swimmer, glasses wearer, shy and retiring (or I used to be), lover of justice (no, justice is not a toyboy), admirer of the internet, and intellectually enquiring.